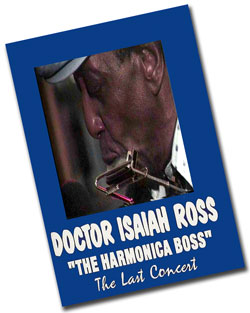 With a donation of $30 or more to the Doc Ross Scholarship, this DVD of Doc’s last concert is yours to enjoy! (Your donation covers the cost of the DVD, packaging, and shipping/handling, while providing a gift to the scholarship.)

This DVD can be played anywhere - NTSC is used.
This concert was performed on January 10, 1993.

Mail in your Donation

Checks and all credit cards are accepted. Be sure to include your address so that we may ship you a tax statement along with your DVD! Allow at least 3 weeks for delivery.

You may also process your gift by using our online donation form. Be sure to note "Doc Ross Scholarship" on the "Fund to give to:" text box on the form!

Isaiah “Doc” Ross was born in Tunica, Mississippi in 1925, the youngest of 11 children. Although his father was a day laborer, doing farm work, lumbering and building, Isaiah was exposed to both live and recorded music at a very young age. His father and uncle, both harmonica players, generally played spirituals and, as a child, Doc would take his father's harmonica from the mantle and try to play it.

Doc Ross made his debut at the age of 11 with a group called "The Silver Kings", comprised of local musicians from the Tunica area. At the age of 13, he played two or three house parties a week for $2.50 a night. At 16, he borrowed a guitar and taught himself to play. Since Doc was left-handed, he turned the guitar upside down and created the unique style he used throughout his career. At 18, he picked up the nickname "Doctor" because while in the Army he carried his harmonica in a black bag similar to the kind doctors used. Doc won first prize at a base talent show, but it wasn't until the late 1940s that he turned professional.

Doc began broadcasting live over radio stations KFFA in Helena, Arkansas, WROX in Clarksdale, Mississippi and WDIA in Memphis, Tennessee. In the early 1950s, he signed a recording contract with Sam Phillips label “Sun Records.” Four titles were released – “Come Back Baby” and “Chicago Breakdown” on Sun Records, while “Country Clown” and “Doc Ross Boogie” were released on the Chess label. At this time, Doc was recording as “Doc Ross and his Jump and Jive Boys” and doing a radio show with Sonny Boy Williamson.

While on his honeymoon in Flint in 1954, Doc found a job at the General Motors Truck and Bus, Metal Fabricating Plant. In 1965, Doc made his first European Tour with the American Folk Blues Festival. He won a Grammy Award in 1981 for the best ethnic or traditional recording of "Chicago Breakdown".

The Doc Ross Music Scholarship was established in honor of Isaiah “Doc” Ross by David J. Boyd and Steve Hester.

APPLICANTS MUST SUBMIT AN APPLICATION: